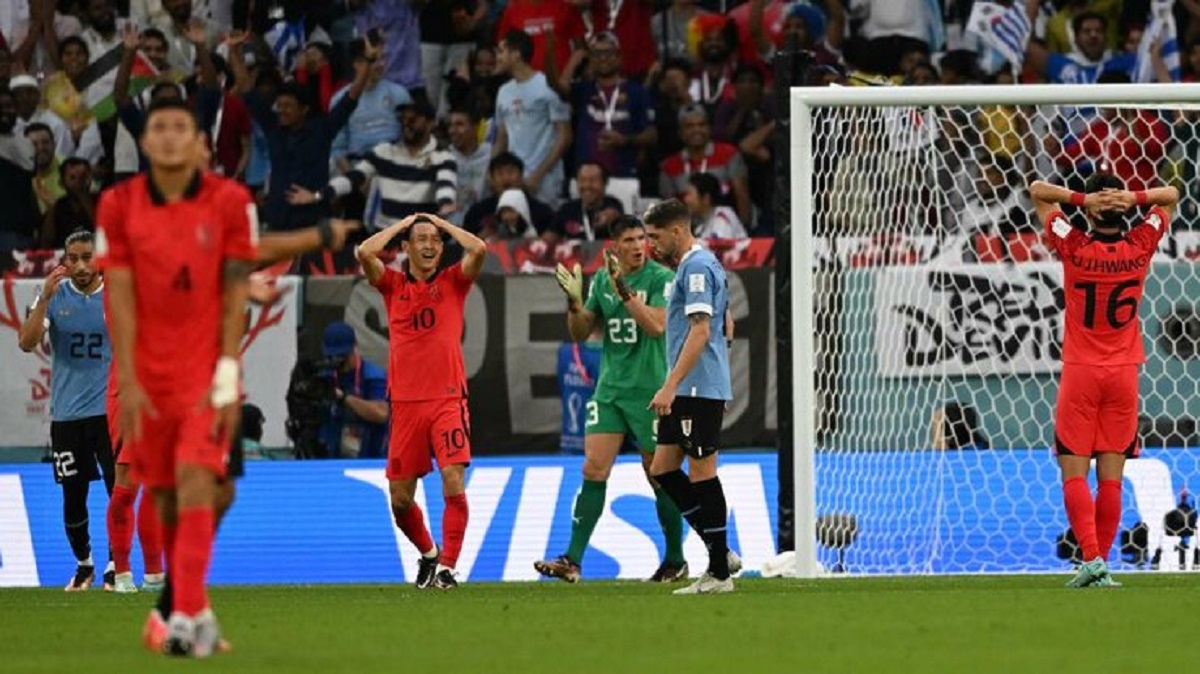 Nothing separated Uruguay and South Korea in a tetchy FIFA World Cup Group H opener, as La Celeste failed to build on a run of five consecutive group stage victories dating back to the 2014 finals.

The match signalled the beginning of a new era for Uruguay at the World Cup, with this their first at the tournament led by a coach other than Oscar Tabarez. Diego Alonso is the current man in charge ,and he will want much more from his side going forward if they are to realise their ambitious hopes of lifting the trophy on December 18.
They weathered a fast start from Paulo Bento’s team and began to assert their authority on the contest, as José Giménez played a long ball into the path of Federico Valverde, whose strike appeared to take the slightest of deflections before heading just over the bar. South Korea were suddenly on the back foot, but squandered a golden opportunity to break the deadlock when Hwang Ui-jo blazed a close-range shot over the bar after being teed up by Kim Moon-hwan. Down the other end, skipper Diego Godín rose highest from a corner, only to see his header cannon off the woodwork at the end of a closely-fought first half.
Son Heung-min was showing plenty of endeavour without having too much of joy, and the swathes of South Korea fans breathed a huge sigh of collective relief after the Tottenham winger recovered from Martín Cáceres’ uncompromising challenge. Uruguay were slow out of the traps after the break, and worked their first opening when Darwin Núñez raced to the byline and saw his cross-shot parried to safety by Kim Seung-gyu. Uruguay’s frustrations going forward were summed up by the relative anonymity of Luis Suárez, and the country’s all-time top goalscorer was replaced by the man sitting second on that illustrious list - Edinson Cavani.

Cho Gue-sung added a fresh dimension to the Taegeuk Warriors attack, and dragged a left-footed shot wide. Núñez seemingly held Uruguay’s best hopes of a potentially decisive opening goal, with the Liverpool man seeing another chance sail by after failing to wrap his foot around a long-range strike. Valverde and Son nearly stole all three points late on for both sides, but neither effort found the target.
In truth, neither goalkeeper was sufficiently tested on a day where both sides showed a lack of quality to take all three points. Both teams are back in action on Monday, when South Korea play Ghana and Uruguay face Portugal.