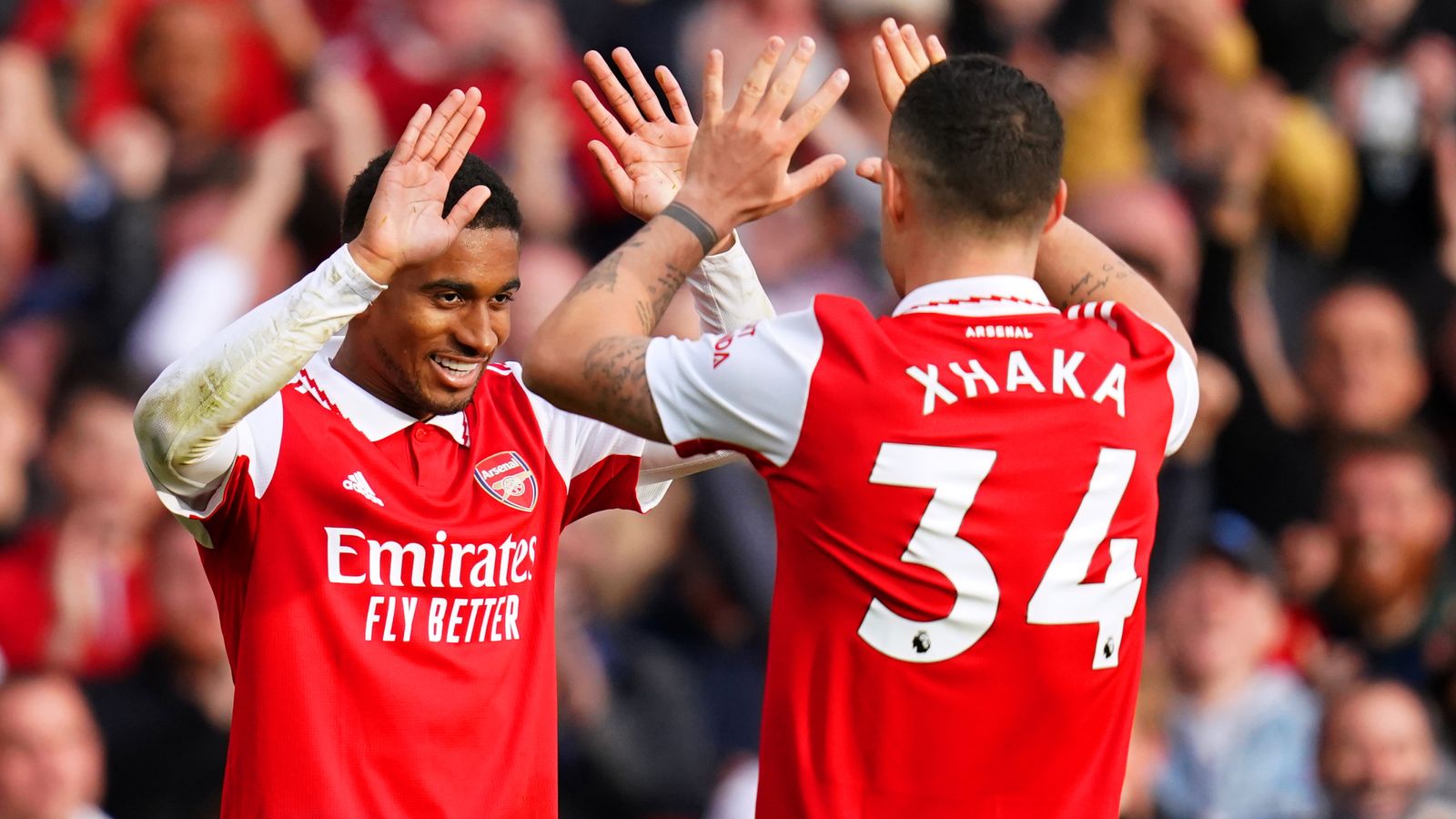 Reiss Nelson scored twice after replacing the injured Bukayo Saka as Arsenal thrashed Nottingham Forest 5-0 to move back above Manchester City at the top of the Premier League table.

Nelson hadn't made a Premier League appearance since August of last year and hadn't scored in the competition since July 2020 when he came on for Saka in the first half, but he seized his chance with two close-range goals in three minutes soon after the break.
Earlier, Gabriel Martinelli had given the hosts a fifth-minute lead when he headed home Saka's cross, but, just three weeks before the start of the World Cup, the England international was subsequently forced off with an ankle injury after a poor challenge from Renan Lodi.
Saka's injury stalled Arsenal's momentum initially but they were rampant after the break, scoring a third goal in a devastating eight-minute spell through Partey, Nelson turning provider as his pass was sumptuously curled into the top corner by the Ghanaian international.
Martin Odegaard added Arsenal's fifth, dispatching a powerful finish from Gabriel Jesus' lay-off, as Nottingham Forest, 1-0 winners over Liverpool last weekend, left a buoyant Emirates Stadium firmly rooted to the bottom of the Premier League table, their plight a stark contrast to what's going on at Arsenal.

How Arsenal blew Forest away

As has become a feature of Arsenal's performances this season, they started quickly and aggressively, taking the lead after Takehiro Tomiyasu won possession in the attacking third and fed Martinelli.
The Brazilian looked up and picked out Saka on the right-hand side, then continued his run into the Forest box, meeting his team-mate's in-swinging centre with a superb header that flew past Dean Henderson.
Arsenal's players held up a Pablo Mari shirt during the celebrations, a tribute to their on-loan defender following his stabbing in Italy this week, and when the action resumed, they continued to pin Forest back and cause them problems.
Jesus curled a shot narrowly over the bar and Martinelli saw another effort backed off the line by Renan Lodi, but by that point, Saka was already in discomfort following Lodi's late tackle.
His enforced withdrawal opened the door for Nelson, but the Gunners struggled to break the visitors down without their talisman for the remainder of the first half, briefly allowing Forest to grow in belief.
That belief swiftly evaporated after half-time though, Nelson rifling home his first after his initial shot was parried by Henderson, then adding his second when he flicked a low cross by Jesus beyond Henderson.
Nelson's double made the game safe but Arsenal weren't finished, Partey adding the fourth with a outstanding long-range strike almost identical to his goal against Tottenham here at the start of the month.
The Gunners continued to threaten, with Jesus teeing up Odegaard for the fifth, the Arsenal captain delaying his shot before sending a rasping finish high into the net.
Arteta made a raft of changes in the closing stages, allowing some of his key players to get some much-needed rest after a period of nine games in a month, but Jesus stayed on for the full 90 minutes as he continued to search for a goal.
The Brazilian had two golden opportunities, seeing a one-on-one effort saved by Henderson then somehow failing to turn home a Ben White flick from two yards out following a late Fabio Vieira corner.
But it was Nelson's afternoon in the end, his eye-catching impact ensuring Saka's injury did not dampen the mood as much as it might have done otherwise, and ensuring Arsenal rediscovered their form after last weekend's 1-1 draw with Southampton.

Arsenal are next in action midweek, hosting FC Zurich at the Emirates in the Europa League on November 3, before a trip to Stamford Bridge to face London rivals Chelsea on November 6.
Nottingham Forest will entertain Brentford at the City Ground on November 5.